Xmgrace is a very nice piece of software to create publication quality figures. Even better is that it stores your data and graph layout options as plain text (which is especially nice in combination with subversion or scripts to edit your graph).

But some things are not very intuitive, which is why I keep a list of some useful possibilities below:

See also the Grace users guide and the grace forums.

If you have more helpful hints, please post them in the comments, so that this blog post will become an interesting collection of tips that can be turned into a useful "cheat sheet".

Splitting a pdf-file under Linux

The pdftk command (pdf toolkit) can perform many operations on pdf files. One that I found useful is extracting certain pages from a pdf file. For example, to extract page 115-142 from input.pdf and save it as chapter5.pdf, the command would become:

How to use a free SMTP server that is accessible from anywhere, using your gmail account?
This may be useful if you are at a location where there is internet, but no (known) SMTP server as is the case for many public wifi networks, or when you are using your neighbour's wifi signal.

If you want the email to appear to be sent from a different e-mail address than the gmail one, you can change this as follows:

Draw a helical wheel plot from a pdb file

Many programs are available that draw helical wheels from a given peptide primary structure (sequence), assuming a perfect alpha helix. Sometimes it may be interesting to see what the helical-wheel plot of a non-ideal helix looks like. Because I could not find such a program, I created one myself.

This script needs the PDL and SVG modules, and makes some assumptions as to how your pdb file looks. Please read below.

It is a Perl script that uses the PDL (perl data language) module for the calculations and the SVG module to generate the image. You should have Perl and these two modules installed to use it. The modules can be downloaded from http://www.cpan.org. You also need the Getopt::Long and Pod::Usage modules, but you probably already have those. I only tested it on Linux, but it should work on windows XP (and other versions) as well.

I have made the script available under the creative commons by-nc-sa licence, which means you may use and distribute it as long as you say you got it from me. And not for commercial purposes. If you publish any results, I would appreciate it if you mention my name in your article. At the moment there is no scientific publication related to this software.

To learn how to use the program, you can take a look at the man-page with

The program goes through the following steps to draw the helical wheel:

The numerical data for all steps is written to a log-file, in case you want to know what happened.

The output image will look similar to this (it is resized and converted to a png file here for web publishing): 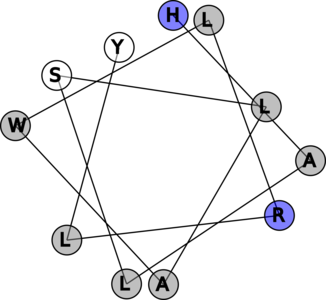 Because the program creates an SVG image, it may be edited and resized without losing quality. I recommend inkscape for this purpose.

It is important to realize that this program does not show the idealized helical wheel representation, but a projection of the CA atoms on the xy plane of the actual pdb coordinates. This is useful, but of course leads to images that "look less nice" than the idealized helical wheels. If a helix is curved, has a kink, or flexible termini, the output may not be what you expect. If this is the case, the principal helix axis that is calculated by the software does not lead to the "nice" representation you want to see, even though it is technically correct.

There are three ways I can think of to solve this problem:

Please also note that the script makes several assumptions regarding the way your pdb file looks. If your pdb-file looks like the example below, it should work:

At the moment, pdb-files that contain a chain identifier field cannot be read without making a small change to the source code of the script. The easiest way around this is probably to temporarily remove the chain identifier from your pdb file with your favorite editor (try a regexp in vi).

Feel free to contact me if you have any ideas, questions, problems or comments.

The second thing most people do when they start programming microcontrollers is to try and use an external crystal as a clock source. And many beginners start by setting the wrong fuse bits, so that the AVR expects an external clock signal instead of a crystal, thereby locking themselves out. This may be a problem, because the fuse-bits cannot be changed back without actually connecting the external clock source the microcontroller expects.
I am no exception, and started out by setting the wrong fuse bits. It was however very educational, and I will describe below how I created the problem, and how I corrected it.

The first thing to do, is to read the current fuse bytes:

In hex, these values are 0xD9 for the high fuse byte, and 0xE1 for the low byte, the factory settings of my brand new atmaga8. My programmer board has a 3.6864MHz quartz crystal that is connected to the XTAL inputs, and the atmega8 datasheet will tell us the appropriate fuse bit settings.

Now that I write this I do not see why I made a mistake setting the fuse bits, but a fact is that I told the AVR that I have an external clock source by setting the low byte to 0b11100111. The following error message was the result when I tried to upload a program to the microcontroller:

You're welcome. After a long search on the internet (and some experimenting) I succesfully used a second microcontroller as an external clock source, so that the controller with the wrong fuse-bits could be reprogrammed.

First, I removed the external crystal and the two capacitors. Then I connected one of the output pins of a second microcontroller to the XTAL1 pin of the "broken" atmega8. Nothing should be connected to XTAL2. Both of the microcontrollers have to be connected with their GND pin to the same ground, and to a power source of course. The working microcontroller should be programmed to send pulses with regular intervals on its output pin. The program shown below is fine:

With this setup, the Atmega8 with the wrong fuse bits may be programmed as usual, because the other AVR now serves as external clock source. I started out by setting the default fusebits back:

Because of all the error messages, I tried again, just to check if the fuse-bits would be unchanged this time (they should be, because I just set them):

To set the correct fuse bits, I referred to the atmega8 datasheet again.

Knowing this, one wonders what the values of the high and low fusebytes have to be. The answer is again found in the datasheet:

Combining this with the information above, we now know that we want to program the following bits:

And the avrdude command becomes:

After having put back the crystal and capacitors, I set the fuse-bits to their correct values, and the microcontroller worked perfectly again, now using the speed of the external crystal.

Installing avrdude on a Gentoo box

This post describes how to install avrdude on Gentoo Linux. Avrdude is software to "burn" a program on a microcontroller. I am using a MyAVR programmer board that is connected to the parallel port. I started out by following the (gentoo specific) instructions on this website, but got some error messages.

Fortunately, the solution to this problem is described on the gentoo-forums. So I looked up my gcc-version and used it as a command line parameter for crossdev:

There were no more error messages. Crossdev creates a portage overlay and installs it right away, so now everything should be ok.

To set up avrdude to work with my microcontroller programmer (The MyAVR programmer), I needed to add an entry to /etc/avrdude.conf

This entry describes the pin-layout, which you should be able to find in the manual that comes with the programmer. The "type = par" directive is used to tell avrdude that the programmer is connected to the parallel port. Time to test!

Cool! Let's program! How to compile programs and my first experiments with the Atmega8 AVR, will be described in different posts. Have fun!

A couple of days ago, I removed the dust from my old laptop, and installed Linux on it. I chose to install the damn small linux (dsl) distro and encountered some (small) problems during installation, which I describe below.
Since my laptop does not have a cd-rom drive, I used a bootdisk I still had lying around from a previous version of dsl. I put the dsl image (dsl-4.2.5.iso) on a (FAT16) usb stick. Note that my old laptop cannot boot from usb, hence the bootdisk. After booting I got a segmentation fault, which was solved by booting with the following kernel options:

The vga=771 line was needed to get the display resolution right. After having booted successfully, I followed the harddisk installation instructions, but the dsl-hdinstall script did not run because it could not write to the /tmp directory. The /tmp appered to be a symlink to a ramdisk, but the ramdisk did not exist. This was easily solved:

DSL is running from my harddisk now (still using the lowram mem=16M boot options). I still need to configure a couple of things and check if all the hardware works. If anything interesting comes up, I will add it to this message.

Unfortunately, sometimes people want me to convert some beautiful LaTeX to MS-Word. I first tried to convert the .tex to .html and open the html file in MS-Word, but the result was usually a big mess. The best way I found so far is described here:

Not everything is converted correctly:

Despite the many drawbacks, I found that this is the most reliable way to convert the document. It is a lot of work, but for me it worked better than any other method. The method described here is easier than using conversion programs that try to preserve formatting, because in my experience they only make a bigger mess. I am always willing to learn though, so if you know a better method please let me know!